Today we’re sending out links to our new EP called “Heaven Of Sin” to everyone who signed up for the Keep Of Kalessin Cashback Card! 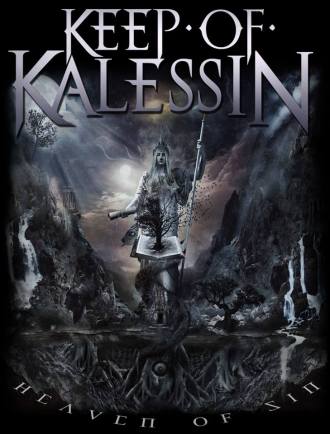 The EP consists of three tracks that we recorded during the Epistemology recording sessions, but we felt that these songs didn’t quite fit on the album. Not because they’re not good enough, but when you write an album you kinda wanna stick with the whole concept and keep the correct kind of flow throughout the album.

The tracklist on the EP is as follows
1. Descendant – The Legacy of Kings
Fact about this song is that I wrote it for the Eurovision intermission that we did with Alexander Rybak. You can hear in the middle part that there’s a lot going on with violin and guitar. This song was actually written for the intermission we were going to do and I even showed it to the production team in early stages. However, since Reptilian was so fresh and had just been released, we had to keep promoting that album instead of “moving on” too fast with a new song. So we edited “The Divine Land” instead and did that together with Alexander Rybak which I think turned out to be a great performance!

The theme of the song, as you can see from the title is going back to Armada and Kolossus albums and building on some thematics from that era. Should be a nice little trip back in time for fans of those albums!

2. Typology
This is a track that I wrote in Spain back in 2012 and it’s very different from what you normally hear from Keep Of Kalessin. I write a lot of different types of music and it’s sometimes hard to find ways to release these songs. I think this one turned out pretty cool and I think it can be a great song to play live actually. Because it will help us break up the blast beats and add some groove to the show.

The title also stands out, like the song, but is also a simple reference back to the Epistemology album.

3. Heaven of Sin
This is a typical Keep Of Kalessin “ballad” like “Dark as moonless night”.
I had this song lying around for ages. If you attended any of our shows many years ago and got to see a soundcheck or linecheck, then you may have heard this main riff as I used to soundcheck with it all the time. 🙂

Everyone who signed up for the Keep Of Kalessin Cashback Card will get this EP for free today!

If you didn’t manage to sign up and still wanna get it, no worries. Just head over to http://www.keepofkalessin.com/#!fanclub/cfvg to sign up and remember to also sign up for the Cashback Card after you get the registration e-mail.

Once you’ve signed up you will get the EP and all other items for 70% off from our webshop!